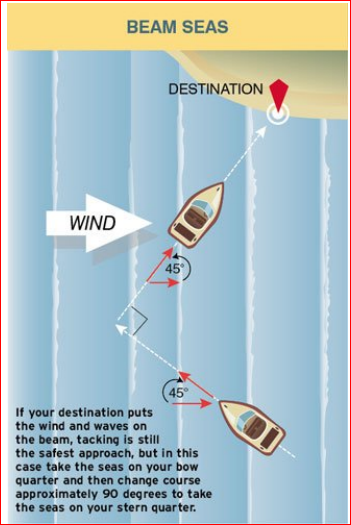 Today we look at Beam Seas

In a beam sea, the vessel is broadside to oncoming waves. These waves strike the craft's sides and cause it to roll from side to side. The effect of a beam sea depends on the vessel: its width, how top-heavy it is, its free-board, and hull design. Beam seas cause two problems. First, the rolling motion is very uncomfortable for passengers and crew. Second, when wave height equals or exceeds boat width, there's a very real danger of capsizing. In my 21-foot patrol boat, I avoid taking the sea on the beam any time the waves are higher than four to five feet.

Even though an experienced helmsman can operate a large boat in a moderate beam sea, successful maneuvering requires constant attention. The operator must watch for big waves and turn to meet them on the forward quarter. At this point it's a good idea to get the seas off your beam by using the zigzag-tacking maneuver described in the last section. When you tack in a head sea, you angle into the wind, taking the sea first on one side of the bow and then the other. When you tack in a beam sea, you angle first into the wind and then angle away from the wind.

First take the seas on your bow quarter, then change course approximately 90 degrees to take the seas on your stern quarter, but beware, there are special risks and steps to take when the seas are on your quarter, as we'll discuss below. In most cases you should make the tacks as long as possible and be extra vigilant when the seas are on the stern quarter. A combination of slowing and turning to meet the waves at an angle will reduce your risk of capsizing. Tacking is a slow way to get where you're going, but it's more comfortable and safer than being hammered on the beam.